The church looked normal from the outside. All steepled and angular in the way of good, rural Indiana churches of a certain age. Red brick and stained glass, St. Thomas Aquinas, surrounded on three sides by hot asphalt parking.

Mitch carried his daughter up the steps and through the broad, wooden front doors. Inside, the heat was oppressive.

“I’m here to see the baptism,” Mitch whispered to the usher.

The usher nodded, guiding him down the aisle. “Baptism’s at the end of mass,” he said.

The pews were already packed. Since there wasn’t much room, Mitch put his daughter on his knee. She was a year and a half, blonde and cherub-cheeked. Old enough to run, but not old enough to listen. “You were like that, too,” his mother told him once, when he’d asked if his daughter was normal. “Lasted till you were seventeen.”

Around him, ladies fanned themselves in the heat, dressed in their Sunday finest. At the front of the church, the minister began. He was an older gentleman, as narrow and angular as the church itself. Somewhere up ahead, among the sea of blue hair and balding pates sat his cousin Jason—along with Jason’s wife, her grandparents, and other assorted relations, both close and distant, all here for the special occasion.

Mitch came from steel people, north counties, Hammond and East Chicago. But these were rural people down here. Farm people. His cousin’s wife’s side. In Indiana, an hour south might have been another world.

His daughter was good for the first minutes of the minister’s sermon. Then it began: she slid down his knee to the floor.

“Now,” he whispered, putting as much authority into it as he could muster.

But his daughter pulled away, sliding into the gap between the pews. Mitch grabbed and lifted her to his lap.

Then his daughter did the thing he’d been afraid of. She started to cry.

The crying turned to screaming. She arched her back, trying to buck herself free.

Mitch did his best to hold her squirming body, but this only made her more upset. Gradually, as the screaming shifted into full-blown tantrum, the expressions around him went from amused to something else. The minister’s words drowned in the noise. Mitch’s face grew hot.

But she continued to squall, kicking her legs now, trying to get away. Old people stared, frowning, craning their necks.

Mitch tried to disappear into the pew. “Shhhhh,” he whispered again.

His daughter only howled louder.

Finally, a woman next to him shot him a stern look. “There is a cry room in the back,” she said.

She pointed. At the back of the church, on the far left side, was a door.

Mitch nodded his thanks, picked up his crying daughter and retreated.

“You’ll be more comfortable here,” said the usher, showing him inside.

It was a white room about fifteen feet square. Folding chairs made neat, narrow rows in which young mothers sat, each cradling a small child. The chairs faced a single large window that looked out over the congregation. Through the glass, Mitch could see the minister, his voice resonating from speakers at all four corners of the room.

Mitch sat with his daughter. “It’s nice here,” he said.

The mother next to him smiled. She was the beautiful, competent mother of a million magazine ads, not a hair out of place.

A moment later, Ashley was squalling again, wanting down.

“Well, if she isn’t just bold as brass,” the woman said.

Mitch let his daughter slide to the floor, hoping she’d stay put. Instead, she crawled under the seat in front of them. Mitch pulled her out, and she started crying again. Around him, the mothers’ smiles faded, flattened, became frowns. A baby a few seats over began to cry, and the frowns deepened. The other children, the good children, were being disturbed.

Mitch wondered what he was doing wrong. He wondered how he’d become so bad a parent.

Eventually, the magazine mother whispered, “You can take her to the back room.”

Mitch looked at her, uncomprehending. He thought this was the . . .

On the back wall stood a door Mitch hadn’t noticed. Above the door was the word “Children.”

Then he picked up his crying daughter and made his way to the back.

This room was smaller. Maybe twelve by twelve. A dozen mothers sat here, a couple fathers.

“Shut the door,” came a whisper.

Mitch closed the door and took a seat. This room didn’t have a large window through which to view the services, but instead a flat screen TV. Closed circuit television. Mitch held his daughter, trying to soothe her.

The woman next to him smiled. “She’s cute,” she said. “She has your eyes.”

The other children in this room cried and whined and complained. They were kids being kids. Mitch watched the screen, praying this would be over soon; once the baptism was over, he could leave. Then he could tell his cousin he’d been here, seen it, obligation satisfied.

Ashley got loose. She babbled and skittered across the floor, crawling under the seat in front of him. She wasn’t, he admitted to himself, just a kid being a kid. She was something more than that. In a heartbeat, she grabbed a woman’s purse and dumped its contents on the floor.

“No,” Mitch told her, snatching the empty purse away. Then, to the woman’s patient expression, “I’m so sorry.”

“Your first child?” the woman asked.

“My third, actually.” He bent to pick Ashley, but she scooted away again, little legs disappearing under another chair.

“Were your other children,” the woman eyed his daughter, “this, um . . . challenging?”

Now Ashley was untying shoelaces. Mitch grabbed at her, but she wriggled out of his grasp. He chased, but by diving between rows, she managed to keep just out of reach. Ashley had no fear of punishment. No fear of strangers. She had no fear of hot things or sharp things or pain. When he finally caught her, she struggled and screamed, arms flailing. She wanted down; she wasn’t afraid to fight for it.

Around the room, the tolerant smiles faded.

The woman beside him pointed. “You should probably try the back.”

This room was smaller still, maybe nine by nine. Inside were five harried parents. Five screaming children. Gone was the flat screen. Instead, a grainy black and white TV hung from the wall, protected by metal grating like you might see in prison. The sound quality was so poor that it was impossible to be sure what the minister was saying—just bits and pieces of sermon.

Mitch sat next to a tall man in the front row. The man’s son ran in circles in front of him, slamming from wall to wall, running back and forth. Back and forth.

“ADHD,” the man said by way of explanation.

“It’s familial,” the man continued. “The docs want to put him on medication.”

Ashley climbed down. She ran. She bit the little boy.

I am a bad parent, Mitch thought to himself.

“You certainly can’t reason with them,” the man continued. “They just do what they do.” Back and forth, back and forth. “It all comes down to temperament. The roll of the genetic dice. That’s what the doc says.”

I’m a bad parent, Mitch kept thinking. This is my fault.

“They don’t even have personalities yet,” the man said. “Just temperaments.”

Now Ashley was under the seats. Mitch tried to pull her out, but she crawled away. She fumbled with the bolts that held the chair together.

A childhood memory loomed to mind—the time he’d taken apart his grandmother’s hospital bed, her still in it, Grandpa saying, “I hope you have a kid just like you.”

“You here for the service?” the man asked.

“Yeah, the baptism. My cousin’s kid.”

Mitch had taken his eye off his daughter for a split second. A grievous error.

Now Ashley had the man’s wallet, somehow. Next, she broke his cell phone. Then she bit him.

Gradually, the tolerant smiles faded. Then came the suggestion, from one of the women. “Perhaps you should go to the back.”

Mitch hung his head in shame.

“Come on, Ashley.” He picked up his daughter and carried her through.

This room was even smaller. Only four parents here. Four little children. One of them was a monster. A thing with dagger teeth and too many legs—horns jutting from between twisted snarls of red, baby-fine hair. It turned its coal eyes toward Mitch and his stomach went loose and watery. And still Ashley was the worst. The loudest. The wildest.

Another room. This one painted flat black. The parents looked up at him, fear in their hollow eyes while the children flew around the room in a destructive blur. Blood coated the walls in some spots. There was no TV, only a single dented speaker dangling by a swaying chord, the minister’s words reduced to a feedback whine. Mitch barely hesitated, moving to the back.

Finally, he came to a room with only a single chair.

A man sat there. A man in a dark suit. There was no child this time.

“Who are you?” Mitch asked the man.

“You may call me the usher.” He was bald and pale and bony. His eyes were the eyes of a man who had seen too many children.

At the back of the room, Mitch noticed there wasn’t a door this time, but an empty doorway, black as pitch. The sign above was illegible, a single word darkened by age and ash. Also, on the left and right walls of the room were similar doorways, similar darknesses. This room had choices.

Mitch put his daughter down. Fear tightened his stomach.

“I wouldn’t go beyond here if I were you,” the usher said.

“It’s easy to lose your way.” The usher gestured to the three open doorways. “People go in, but they don’t always come out.”

“Where do the doors lead?”

“Who can say?” He shrugged.

Ashley ran toward the back of the room, little legs pumping. He almost moved to stop her but didn’t. Something held him back.

She paused near the doorway, staring in. But she didn’t go that way. Instead, she crossed the room toward the doorway on the right. She stopped at the threshold and turned her little eyes up at him, a momentary glance in his direction.

Then she stepped through.

The two men were alone in the room.

Mitch took a step toward the doorway.

Mitch ignored him, stepping to the edge.

“She found her own way in,” the usher said. “You don’t have to follow.”

Mitch paused. “I know,” he said. He listened to her baby voice, a ferocious squeal in the distance. “But she’s my daughter.”

He followed her into the darkness. And always would. 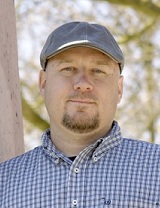 Ted Kosmatka is the author of numerous short stories and novelettes.  His work has appeared in F&SF and Asimov’s, the anthology Seeds of Change, and has been reprinted in seven best-of-the-year anthologies, serialized over the radio, and translated into Hebrew, Russian, Polish, and Czech. He is a winner of the Asimov’s Readers’ Choice Award and has been a finalist for the Nebula Award and Theodore Sturgeon Memorial Award. His first novel, The Helix Game, is forthcoming from Del Rey. Ted worked for most of the last decade in laboratories in Indiana but now makes his home in the Pacific Northwest, where he writes science fiction video games for a living.