The shore was dark when we showed up, but it would soon be blazing, and that thought was all I needed to warm me while we built the bonfires. The waves slopped in and sucked out again like black tar, and I went along the waterline with the others, pulling broken boards and snags of swollen wood out of the bubbling froth and foam, hauling it across the sand and up to the gravel where the road edge ran.

Piles from previous scavenging were heaped up high and drying there. It didn’t take us long to figure out which ones were dry enough to burn. Some of the piles already had little combs of bluish light flickering along the splintered edges, as if they couldn’t wait to burst into flame. These were the ones we pulled from first, dragging pieces down toward the sound of waves and standing them on end, so they stood there tilted and crazy, like drunken skeletons leaning on each other so they wouldn’t fall down.

I had matches and lighters, pockets full of strikers and flints and everything we’d need to start a fire. While I was standing there looking at the pile of drift, seeking the best place to set a flame, she came up next to me with a can of fuel, uncapped already, so volatile that she seemed to swim and melt in the fumes like a vision on a hot road.

“You want it here?” she asked.

“Let’s get it burning,” I said. And she tipped the can, dousing the pile so it would make a proper pyre. The stuff was tinder dry already; the touch of gas was nearly friction enough to set it off. But it waited almost respectfully, the pyre wanting me to give it life. I’ve always been obliging.

As the flames exploded, she threw the can into the fire, and you could hear it crumple like a metal lung collapsing. I turned to her and she was laughing, and then I was on her, mouth on mouth, sucking on the metal in her tongue, pierced by it. She tasted like gasoline.

We weren’t the only ones around the bonfire, far from it. Many hands had been pitching on wood and paper and broken furniture, ripped-up books and matted newspapers, dolls stuffed with sawdust, figures made of straw. We were shadows with bright glinting eyes, orange and vibrant in the light from the flames, all of us ageless and infinitely experienced in our innocence. We danced around our pyre as if it was the center of the universe; we were part of the ring of light that held off the encircling dark. I squeezed her hand and couldn’t tell, when our knuckles ground together, whether it was her bones or mine I felt. I sucked on her tongue and she chewed on my lips; we could devour each other and never run out of other to devour. We were sweating from the fire, even though the wind from the black sea had turned cold as the flames got hotter, and now you could hear the screaming it carried.

“Have I met you before?” I asked, because it seemed like I must have. But she shook her head. “I’d have remembered you.” Which must have been true because I could never have felt this way about someone I already knew. It was her strangeness that made it so easy to be with her. This was just for tonight: the guzzling fuel; the single, unique and isolated spark; the bonfire that had never blazed like this before, never lifting these exact flames. Nothing ever happened twice—even though the fire was eternally the same.

Her eyes were so deep that I couldn’t pull myself out of them. I put my hands all over her, and she was on me as if she wanted to crawl inside. As we grappled, my vision went past her down the beach, along the shore, to all the other bonfires blazing like this one. Silhouettes dancing around them, figures like stick-people, hardly more than tinder themselves. The smoke rose up and blotted out the starless dark, making it churn and billow so the cast-off firelight had a place to gather and glow back down at us. It was like a scene of invasion, all of us massed at the waterline, waiting—but not to repel the invaders, hardly that.

“Coming,” she said, breathless, urgent, and pushed away from me. “They’re coming.”

As I sprawled back on the sand I knew she was right, our time was over, and I could only be grateful we had had it. The screams were louder than the waves now, and out in the black water, just at the limits of light, the boats were coming in. One to each pyre, they surged forward, sucked in by the tide, but mainly poled in by the boatmen. As they grounded on the sand, we moved in a mob from the warm glee of the bonfires and tried to make ourselves solemn or terrifying as we pulled the passengers from the boats.

It was the usual thing: some never stopped screaming, others were far past that point. A few stumbled and otherwise came along without resisting, but others had to be taken hand and foot and dragged across the sand and all the way up to the gravel. One or two always broke and ran until they saw that there was nowhere to go, and then they collapsed or staggered off into the dark or wandered back into the surf. Some had to be coaxed out of the boats again so the craft could return, empty.

Tonight there was some unexpected entertainment, though. I saw my lover whispering to one of her charges, grinning as she spoke. The girl she was talking to looked so familiar; it might have been herself long before, on the night of her own arrival. Whatever she whispered, it must have been persuasive, because as soon as she finished, the girl from the boat made a shocked face, then ran and threw herself headlong into the fire. She burned there, burned and burned, screaming. While from that mouth I’d been kissing a little while before, visible fumes of laughter poured. The taste of gas on my tongue turned flat and musty. I felt sick but I couldn’t say what had done it to me. There were too many possibilities.

I went over to the bonfire. She tried to stop me when she saw what I was doing, but I shoved her away and waded into the fire and grabbed hold of the burning girl and dragged her out again. Her hair was gone, her skin had charred and fallen in on her bones; a lot of her was simply burned away. She stood shaking and looked at her hands, cooked and raw, then up at me, and last of all at her tormentor.

As I said this, I felt I spoke the truth, and it was like a touch of flame to the gasoline on my breath. I choked on my words, spitting fire, and it caught in my hair and I felt myself burning all over. It all went dark, oily clouds of blackness fumed around me, and when I opened my eyes I was on my knees and the girl was stumbling off into the shadows, smoking and weeping, heading toward the roadside where the rest of them had gone. I could hear the sound of engines out there, from the trucks with hooded headlamps that came to collect them. The trucks came and went, came and went. The boats pulled away and the waves rolled in, and the pyres burnt themselves out all up and down the shore.

I realized at some point that my lover was crouching next to me, serious now, looking weary and no longer mischievous.

“I only told her what I wished someone had told me,” she said. “That’s all. You shouldn’t have said I lied. I’m not a liar.”

The pyre was almost dead. Soon it would be embers. The trucks had stopped running. Along the shore there were no other lights. Everyone was heading in.

She took my hand but I threw her fingers off. After a while she tried again and I was too tired to repulse her.

“So are you coming?”

I shook my head. I squeezed her hand. I watched her turn toward the sea and trudge out through the surf.

The instant she was gone, I got up and ran after her, but the water clutched my ankles and the waves pushed me back. I waited on the shore, waited there in the dark, staring after her, waiting to see if she would return.

After a while the bonfires blazed at my back, and the boats came in again and again, but she was never in them. 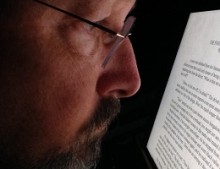 Marc Laidlaw is the author of six novels, including the International Horror Guild Award winner, The 37th Mandala. His short stories have appeared in numerous magazines and anthologies since the 1970s. In 1997, he joined Valve Software, and over the next nearly two decades, worked as lead writer on the popular Half-Life and Dota 2 franchises. In 2016, he retired to resume writing his own stories. Recent publications include a novella, White Spawn, available as a chapbook and ebook from PS Publishing. Updates and other things may be found at his website, www.marclaidlaw.com.