Step on a Crack

As sometimes happens, this essay started with a snippet, a small memory of walking back to my second or third or fourth grade classroom singing that old song about stepping on cracks. How some of us avoided them, already instilled with superstition, and how some, to tempt the gods or fate, did not. I had also been thinking about our collective American nightmare of school shootings, how even with all the awfulness of growing up in the ’80s, we never dreamed what we would face as adults, how every fear we once voiced would manifest itself in another way, one that was more terrible than anything we ever imagined.

I still won’t step on cracks, so I don’t break my mother’s back. I still think the last one there is a rotten egg, that if I make a face too many times it’ll freeze that way, that if I find a penny and pick it up, then all day I’ll have good luck.

I still believe you’re only safe when you’re touching home base, and I still cross my fingers to make something untrue. I still knock on wood to ward off bad luck, and I still hide under the covers some days in hopes the monsters won’t find me.

An apple a day keeps the doctor away, but that’s just good nutrition. There’s no superstition to keep the body safe, unless we count the covers over our heads, or how we have to change our faces so they don’t freeze in fear. When a hearse passes by, I pull over to the side of the road, although maybe that’s out of respect rather than superstition.

I only know that some days I have to pull over when the news comes on the radio and I’m reminded of all the things we believed as children: that monsters only come out at night, that the slowest among us would suffer some punishment, that there was such a thing as safe. We thought as children of the ’80s that all the danger came from the sky, but even then we knew you couldn’t dodge bullets, back when we formed our small fingers into hand-guns and aimed them at one another. Sometimes we used rocks or sticks, and sometimes we said we had shields, but despite the strange superstitions we subscribed to, we always knew you couldn’t side-step or shield yourself, though we claimed to every time someone shot at us, scared as we were of dying. We always knew there was no getting up. That once you were hit, you were out of the game, stuck there in the dirt with the others already shot.

We can check the closet and beneath the bed, but monsters are never where we expect them to be. I never say “Cross my heart and hope to die,” anymore, nor wish a thousand needles in my eye. I never say “Bloody Mary” in front of a mirror, and I never say “One, two, Freddy’s coming for you,” like that Nightmare movie about a man killing kids, because the screams at schools are no longer laughter, the coverage on our computer screens more terrible than anything we ever imagined. Growing up I always believed the world would end in the kind of fire that came from missiles, not machine guns. But I still believe blowing out candles grants a wish, so on my daughter’s next birthday I’ll whisper in her ear what to wish for. Then I’ll give her a rabbit’s foot. I’ll search for four-leaf clovers. A horseshoe, a ladybug, the number seven sewn big on her shirt with bullet-proof thread.

Because the things we taught ourselves in elementary were true. We know that parents can die from breaking if their children stand in the wrong spot. We know sticks and stones and fractured bones hurt worse than words ever could, with the exception of “There’s been a shooting at your son’s school.” We know the monsters are everywhere, and we know there’s no place to hide that they can’t find you. 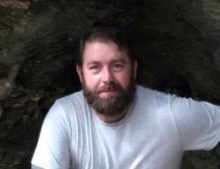 Paul Crenshaw is the author of the essay collections This One Will Hurt You, published by The Ohio State University Press, and This We’ll Defend, from the University of North Carolina Press. Other work has appeared in Best American Essays, Best American Nonrequired Reading, The Pushcart Prize, Oxford American, Glimmer Train, and Tin House. Follow him on Twitter @PaulCrenstorm.